We’ve already talked about the puzzling world of law and social media. Why aren’t big legal firms making more use of the countless possibilities social media has to offer (I swear I’m not biased)? Change begins at home, as they always say, so I think it is time to turn our attention to Irish law firms who are using social media.

It’s heavily disputed what firms make the top three here in Ireland, so for the sake of argument I’m only going to concentrate on three which seem to put the most effort into social (i.e. have more than just a LinkedIn account): Matheson, A&L Goodbody and Arthur Cox.

Matheson is the most prolific of the big Irish law firms using social media. It’s the only one with Facebook, Twitter and LinkedIn. Not only that, but the firm seems to be making a conscious effort to switch up its tone on the three platforms.

On Facebook, Matheson follows the traditional recruitment-ad-only route. Only it makes a little more effort than most. Not only does it push promotional videos and open day announcements, but it puts some effort into actually making the firm look appealing. It’s easy to see how its method must work on the opinions of law students. 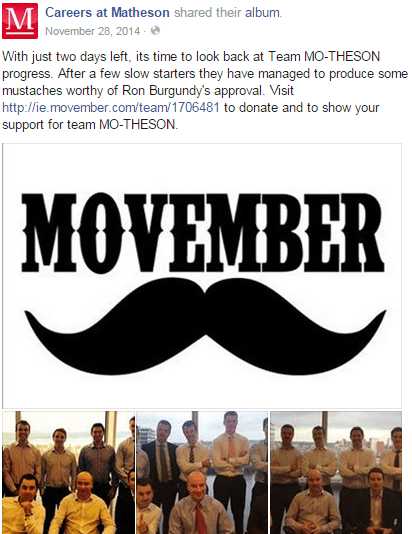 It adds to this with student testimonials and a little content marketing which is nice – for example a recent post: 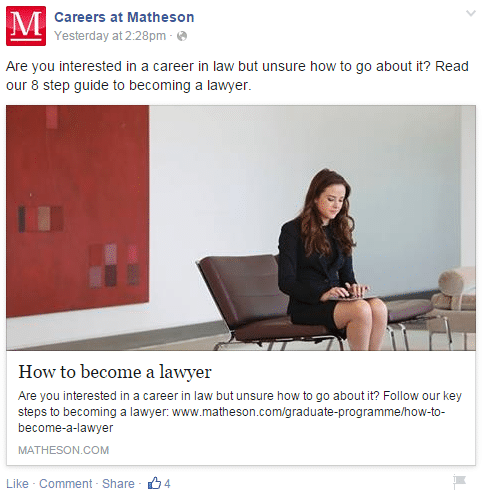 It understands that Facebook is a much more personal place than other social media sites and is able to tap into its target audience – potential recruits.

Over on Twitter, Matheson does a great self-promotion job but its target audience is quite different. It tweets a lot about conferences and talks it organises, charity work it partakes in and once again promote its own content. 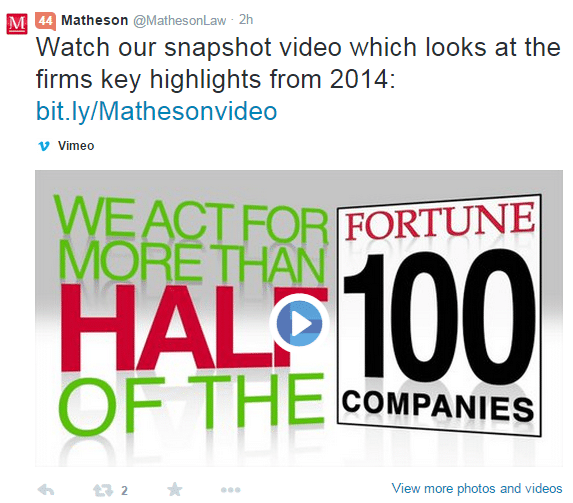 I imagine many people in the law industry would follow its feed and find it interesting. By making sure to change its approach on Twitter, Matheson is able to talk to a new audience. Very nicely done.

Over on LinkedIn Matheson is consistent about posting content – whether it’s law documents, links to its online newsletter or one of its podcast series. Matheson works hard to maintain its credentials as a thought leader in the space. 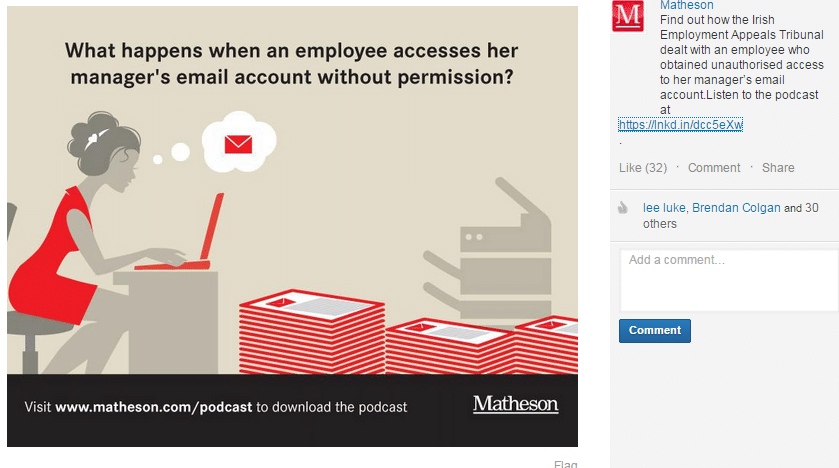 Matheson does a very good job at using the three main platforms well.  There is obviously a strategy in place, and a dedicated team who write well, take (measured) risks, and – I hope are acknowledged within the firm as the social media super stars that they are!

Arthur Cox isn’t on Twitter, which baffles and upsets me. Why ignore a platform so ideally suited to your industry? Ok, sorry, rant over. I still love you Arthur Cox, but seriously time to start re-thinking that decision to completely cold shoulder one of the most important B2B social media platforms there is.

On Facebook, the firm is doing pretty much what you’d expect – driving interest in its Graduate Programme. And it certainly seems enthusiastic when it posts:

Events are a great way to help spread the news of your, well, events so kudos for that! A generation that pretty much refuses to go to anything unless they’ve had to click to indicate their interest, will respond to this type of invite in a more positive way than an email.  I wonder if they supplemented this with targeted Facebook ads to hit up the local law school audiences?

Also nice to see the firm spreading positive vibes about its college events. A little tip though? Tag Trinity Law Soc for more potential exposure. Kids love to creep around Facebook profiles so leave out the breadcrumbs! 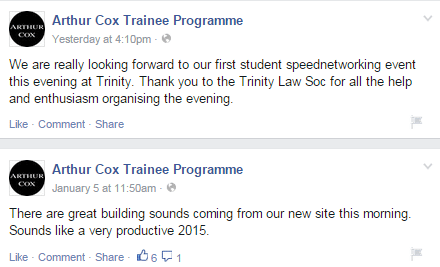 Also, a few images would please my eyes.

Over on LinkedIn, the firm is much more frequent with its posts. It links to its News Blog on its website which definitely is generating traffic with its contacts. The tone is less casual and more informative, which is what the LinkedIn crowd expects.

But once again, NO IMAGES! The content is good, the tone is great, but my eyes are fly past each post. Even a little branded feature image would pick up the blog’s appearance in the feed. 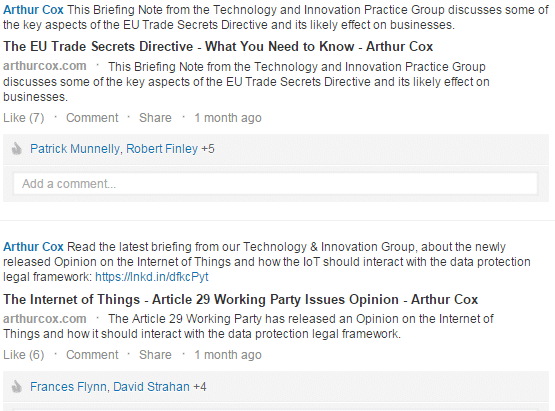 Conclusion? Arthur Cox is on the right track, but again there’s room for a little creativity.

These guys aren’t on Facebook, which I can totally forgive. Focusing on a Twitter makes more sense for its audience and it seems to do it decently. Again, it bigs itself up through events, charity work and great informative content. Tick, tick, tick. 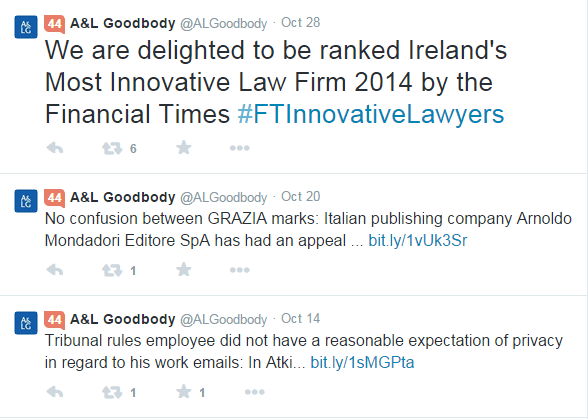 The only thing I would add is more conversation with other users would help enrich the feed. However, this is a broad enough complaint as very few of the firms I’ve been looking at seem to frequently do this (locally or internationally).

The most important thing is that A&L gives Twitter its attentions. It posts every few days with things that will interest a legal audience. Further proof that Twitter reigns superior over Facebook in the contest for Irish law’s affections.

Over on LinkedIn, A&L promotes news, legal documents and industry articles. Like the other two firms, it has a solid following and is putting the effort into frequent posting. 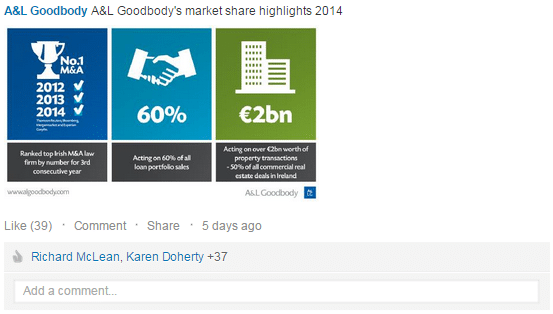 Content marketing is strong amongst these firms, these guys have been doing their homework!

I also really loved the sponsored gospel choir A&L linked on both LinkedIn and Twitter. Things like this really drive positive sentiment for any business on social media. Why not brag about the good things you’re involved in?

I think it’s safe to say that the top three law firms in Ireland pay some attention to social media.

However, echoing my earlier sentiments, there is more to be done. What I like about these firms is that they display the innovative change of tone to suit each audience. What I’d love to see is that thinking go a little further.

My two cents is all it is, but if you found this post interesting why not get in contact? We love to talk social and Irish law is an area we’re very very interested in!

Have you heard about our online course?

Access quality videos, step-by-step downloads, and access to me to answer your every question. Never stare at your screen wondering why? again. Now is the time to get your social media running with a proven process that gets results.  Sign up today.

Book in for a call with us or send an email and tell us what you need.

Ways You Can Spend Your Voucher

Join 5,000 other marketers who get monthly digital marketing tips in their inbox.

Join 5,000 other business owners who get monthly digital marketing tips in their inbox.